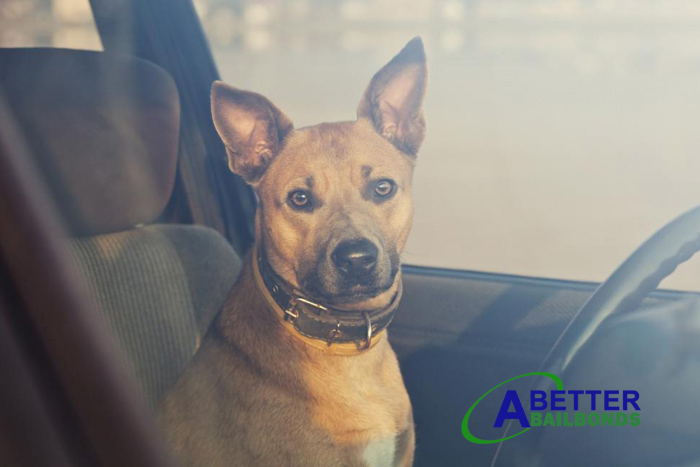 08 Jun Don’t Leave Your Pet Behind in the Car

hile summer doesn’t officially begin until June 20th, the summer heat is already starting to show up. This is one of the many reasons why people are getting so antsy to go outside again, but that is a different conversation. This warmer weather means that it is time once again to talk about the dangers and legality of leaving pets alone in cars.

As the weather warms up, sitting cars can quickly become dangerous for any living thing stuck inside of them. If someone goes out and to run errands and decides to bring their favorite furry companion along for a ride, they need to be careful. If they aren’t, they could not only cause serious harm to their pet but also face some legal trouble as well.

The Dangers of Parked Cars

Viewing parked cars as dangerous can be a bit odd, but it is valid as the weather warms up. The dangers of parked cars are with how hot they can get on the inside. Every driver has had to experience face-melting heat after returning to their vehicle that has been parked in the sun for a while.

Even if the driver was lucky enough to leave their vehicle in the shade, they will still have to deal with the heat as they sit down. The fact of the matter is that when temperatures outside start surpassing the 70 degrees Fahrenheit mark, the interiors of parked cars can easily reach over 100 degrees in just a few minutes. Cracking the windows won’t help much either.

Parked cars in warm weather can quickly create inhospitable environments that no one wants to sit in, and yet some people still think it is okay to leave an animal behind in the car will they go do some shopping.

Leaving Pets Behind Is Illegal

As it turns out, leaving an animal unattended in a hot car is illegal here in California because it is a form of animal abuse. Penal Code (PC) 597.7 makes it illegal to leave a pet unattended in a vehicle when conditions that endanger the health and safety of the animal.

It is important to note that this includes both hot and cold weather.

Another detail of this law is that it protects people who break into cars to save an animal, provided they take the right steps. For starters, before someone resorts to breaking into a vehicle to rescue an animal, they must first check that the doors are locked. Before breaking in, they must also contact emergency services and alert them to the situation.

After they have done that, the person can break into the vehicle as long as they reasonably believe that if they don’t, the animal will suffer great bodily harm, and they break only what is necessary to gain access to the vehicle. After they have retrieved the animal, they must keep it in a safe area nearby and hand it over to emergency personnel once they arrive.

The Penalties of Breaking PC 597.7

The severity of the penalties for breaking this law are dependent on whether or not the person has been convicted of this charge before, and if the animal suffered any great bodily injuries due to being left alone in the vehicle.

If the incident was a first-time offense and the animal didn’t suffer any severe injuries, then the person will face a fine of $100 per animal.

If it is a first-time offense and the animal did suffer a great bodily injury, then the person will face a misdemeanor charge that comes with:

A second offense always results in the above misdemeanor charges, regardless of whether or not the animal suffered any severe injuries.

Since people are allowed to do what is necessary to gain access to the vehicle to rescue the animal, a person may end up needing to pay for car repair as well.

Lastly, since this is a form of animal neglect, a person could also face animal abuse charges in addition to the above charges.

Leave Them at Home with the AC

Every pet owner loves to spend time with their furry companion, and taking them for a ride can be a lot of fun. However, when a person does take their pet for a ride, they should not leave their pet alone in a vehicle on a warm day. Once temperatures start rising higher than 70 degrees, the insides of cars can easily become blisteringly hot.

Leaving a pet unattended in a hot car can easily harm or kill the animal. It can also get a person into trouble for animal abuse. Neither of those situations are something that any pet owner wants to deal with. This is why it is often best to leave pets at home when running errands.